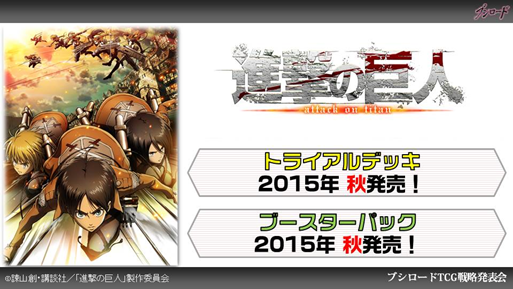 Singapore (January 16, 2015) – Bushiroad announces the addition of hit anime series “Attack on Titan” to its lineup of anime titles in its popular trading card game Weiss Schwarz during the Chaos Festival held at Akihabara UDX from December 28, 2014 to December 30, 2014.

“Attack on Titan” started as a manga published by Kodansha in the Bessatsu Shounen Magazine in Japan, and received an anime adaptation in 2013 that brought it mainstream popularity and critical acclaim. Kodansha credited the series for its first revenue increase in 18 years. The first 10 volumes of the manga sold out after the airing of the anime in Japan. The series has also spawned numerous spinoff light novels, manga and short stories, video games, as well as two anime film adaptations and two live-action films. The first season of the anime concluded in September 2013, and a new season will air in 2016 in Japan. As of November 2014, more than 40 million copies of the Japanese manga are in print.

Attack on Titan synopsis from FUNimation: When the man-eating giants called Titans first appeared, humans retreated behind massive walls. After a hundred years of safety, a colossal-sized Titan smashes through the defenses, unleashing a flood of giants and carnage in the streets. Eren Jaeger watches helplessly as one of the creatures devours his mother.

He vows to kill every Titan walking the earth.

Eren and his surviving friends enlist to fight against the insatiable monsters. The future looks bleak, but there’s more to Eren than meets the eye: he may be humanity’s last hope against extinction.