ITEM! Flashpoint is wrapping up this week with the release of Flashpoint #5 and we get our first book in the new DCU, Justice League #1! 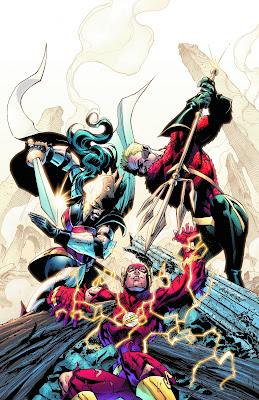 FLASHPOINT #5
FLASH FACT: The war between the Amazons and the Atlantians has arrived. The battle between Diana of Themyscira and Emperor Aquaman will tear this world apart - unless The Flash can fix it! 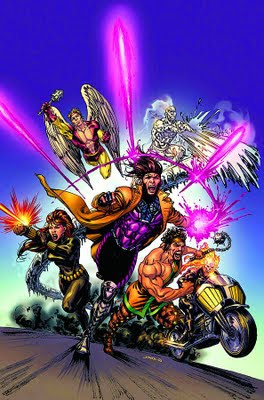 GAMBIT FROM THE MARVEL VAULT #1
X-Man Gambit joins the Champions to take down the Mental Organism Designed Only For Killing! From those halcyon days gone by when the Champions were L.A.'s premier super-team comes this amazing assemblage featuring: Ghost Rider,?the Black Widow, Angel, Remy LeBeau and the demi-god?Hercules! The Champions are in a desperate race to stop the malevolent MODOK from coming into possession of the Scroll?of Vishota. With such a parchment in your control, world?domination is but moments away. Looks as if the ragin' Cajun showed up just in time! 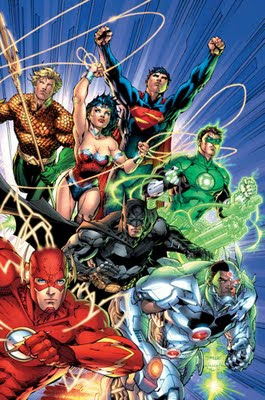 JUSTICE LEAGUE #1
Comics superstars Geoff Johns and Jim Lee make history! In a universe where super heroes are strange and new, Batman has discovered a dark evil that requires him to unite the World Greatest Heroes! 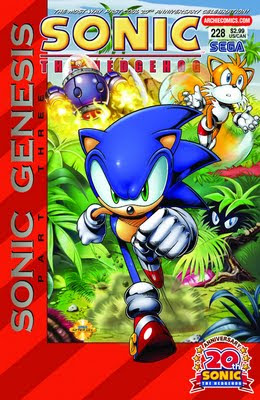 SONIC THE HEDGEHOG #228
"Genesis" Part 3. The most talked-about story in Sonic comic history continues as Sonic brings a curious new face into his adventures: Miles Prower, the boy genius! As Sonic and his friends continue the good fight against the evil Dr. Robotnik, the perils get more perilous, old memories begin to resurface, and the Death Egg orbits. Don't miss the penultimate issue to this anniversary special event!
Posted by Mission Specialist at 8:46 PM No comments: 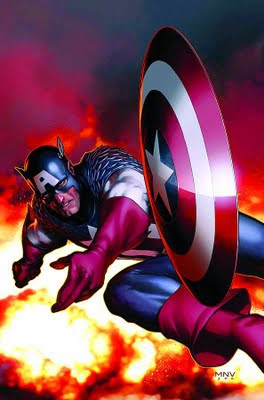 CAPTAIN AMERICA #2
Superstars Ed Brubaker and Steve McNiven continue their quintessential Cap story arc! Find out the secrets of the mission that went wrong in WW2 and why old friends are now old enemies! Its action and history in a cage match for your comic-reading pleasure. 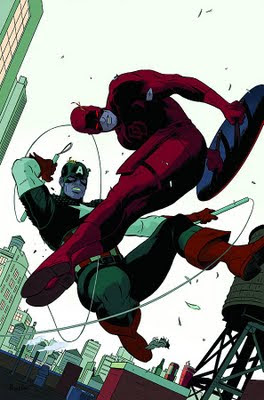 DAREDEVIL #2
DAREDEVIL'S BACK...BUT NOT EVERYONE'S HAPPY!
Given his recent past, Matt Murdock has a lot to answer for and Captain America is doing the cross-examining. Daredevil's quickly learning that burned bridges with his friends and former allies aren't easy to repair particularly when Klaw, the Master of Sound, is on his tail! 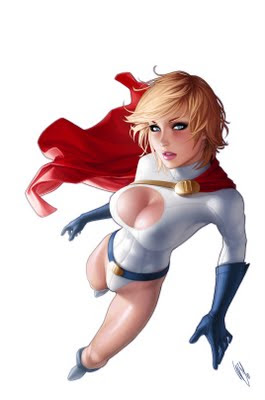 POWER GIRL #27
Power Girl has 20 seconds to save the day - three times over! But who set up this dangerous game? Can Power Girl find a way to overcome not one but three disasters and track down the statistically-minded villain behind it all? 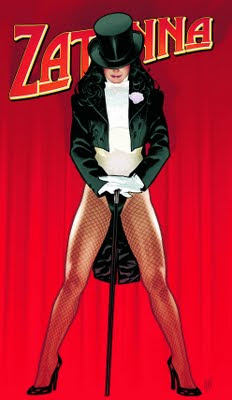 ZATANNA #16
A pesky visitor from Limbo Town comes calling on Zatanna - but is our sorceress ready for an apprentice? And when Uriah starts poking around in Shadowcrest Mansion's many rooms, will he stumble on more than he bargained for?
Posted by Mission Specialist at 5:24 PM No comments: 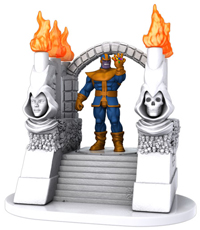 Details are a bit vague at the moment, but more info will no doubt surface before the end of the year. Wizkids is doing a multi-release OP program over the next three Marvel sets.

Although I was not told so; I have to assume that the figures will be the winner prizes. Stores should begin coordinating the event within their community to give people multiple opportunities to hop between stores and have a chance to get the winner prizes!

That is as much information I was able to get, but based on what I heard, it looks to be a great event that gets the players back into stores! I know I'm excited!

Posted by Mission Specialist at 9:23 AM No comments: 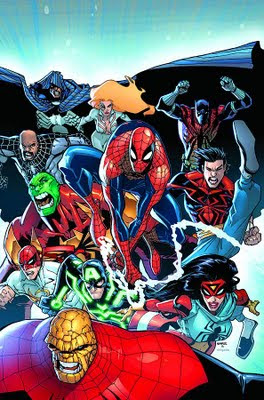 AMAZING SPIDER-MAN #667
THE SPIDER-MAN EVENT OF THE DECADE BEGINS!
Start Webbing The News! New York City's Infestation is complete and eight million people are plagued! As someone near to Peter Parker's life reveals their spider-abilities, the brilliantly fearsome Jackal rises from the past and begins organizing an army of Spider-powered  soldiers. Spider-Man isn't the only hero affected as the threat goon grows bigger than any one Fantastically Friendly Neighborhood Avenger can handle. Best-selling Spidey creators Dan Slott and Humberto Ramos spin a Spider-epic that turns Peter Parker's BIG TIME into a BIG MESS.  Bad romance, death-defying violence and one man facing his FINAL fearsome destiny... this one's got it all! Simply put, pal....YOU NEED THIS! 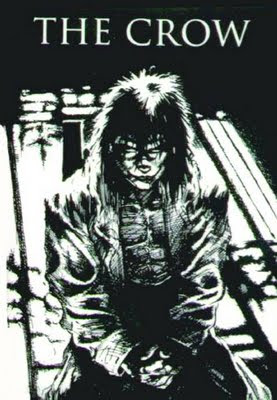 CROW SPECIAL ED TP
The graphic novel that inspired the film series! On the eve of Halloween, street thugs kill Eric Draven and his fiancee. Unable to find rest, Eric's spirit reutrns from the dead, guided by a crow, to exact revenge against the murderers of himself and his beloved. This special edition of the classic graphic novel features thirty pages of never-before-seen material and a brand-new design. 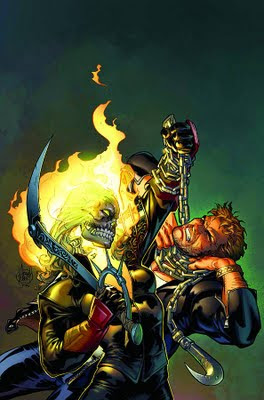 GHOST RIDER #2
FEAR ITSELF TIE-IN
The new Spirit of Vengeance has taken on The Serpent's first avatar,?SIN and held her own in battle. What does the mysterious Adam have planned for the Spirit next and is it cause for humanity's salvation or?eternal damnation? Meanwhile, Johnny Blaze is shown a vision of the future that confirms his worst fears regarding the new Ghost Rider. Can he take on his successor armed only with a shotgun and a really cool old-school motorbike? 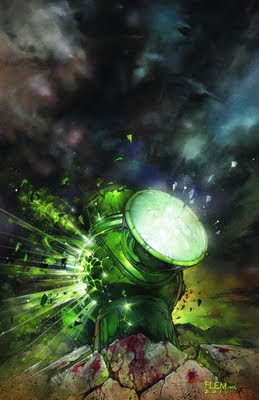 WAR OF THE GREEN LANTERNS AFTERMATH #2 (OF 2)
The blockbuster "War of the Green Lanterns" event has rocked the entire Green Lantern Corps to its core. Who is the new Green Lantern of Sector 2814? The answer will fuel the next year's worth of GL tales!
Posted by Mission Specialist at 4:54 PM No comments:

Paizo Publishing and WizKids Games announce Pathfinder Battles, a new ongoing prepainted miniatures brand to debut in December with Heroes & Monsters, a blind-packed, randomized set of 40 miniatures based on the smash-hit Pathfinder Roleplaying Game. Additional sets will follow throughout 2012 and beyond, including a 60-figure Rise of the Runelords set scheduled for June 2012. These sets join the already announced Pathfinder Beginner Box Heroes pack of four high-quality nonrandom prepainted plastic miniatures, due in October 2011.

“Response to our initial Pathfinder Beginner Box Heroes set has been overwhelming,” said Lax Chandra, President of WizKids Games, "A full line of Pathfinder Battles miniatures will enable us to provide gamers with a huge variety of figures based on the award-winning imagery of the Pathfinder Roleplaying Game.”

“WizKids continues to blow us away with their sculpts for the Beginner Box Heroes and Heroes & Monsters sets,” said Paizo CEO Lisa Stevens. “Every day we’ve been getting amazing images from the WizKids sculptors, and we cannot wait until these figures hit gaming tables all around the world.”

Pathfinder Battles prepainted fantasy miniatures will be available at paizo.com and through WizKids distribution partners worldwide starting in December 2011. 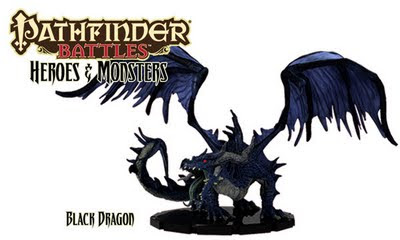 Q: How will Pathfinder Battles fantasy miniatures be packaged?

A: Pathfinder Battles fantasy miniatures will be available in a variety of formats. The first release, Heroes & Monsters, will come in a “brick” of 19 blind standard booster packs, with 16 packs including one Medium or 2 Small figures, and 3 large packs featuring 1 Large monster each. Duplication of figures within a sealed brick has been held to a minimum, so purchasers should get no to very few duplicate figures in a brick (as with any randomized product, collation is not guaranteed). Buyers who purchase factory-sealed cases (4 bricks) should get a nearly complete set of figures.

Heroes & Monsters is scheduled for a December release. Future Pathfinder Battles sets, including June’s Rise of the Runelords, will use a multi-figure blind booster format. Additionally, WizKids plans to release additional Pathfinder Battles Encounter Packs, which will feature visible non-random assortments of selected repainted or resculpted figures from the full sets. Product details for these later sets will be released shortly. 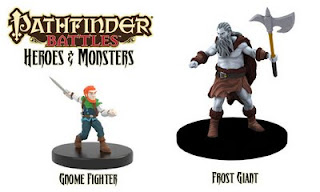 A: The first set, Heroes & Monsters, will release in December 2011. The second set, Rise of the Runelords, will release in June 2012 to commemorate the fifth anniversary of the very first Pathfinder Adventure Path. Additional Pathfinder Battles Encounter Packs will appear between these two large releases. More full sets and Encounter Packs will follow throughout 2012 and beyond.

Q: How many figures will be in each Pathfinder Battles release?

A: The first set, Heroes & Monsters, contains 40 miniatures. Retailers who order one case (four “bricks”) will have the opportunity to purchase the mighty Black Dragon, a special promotional miniature that towers over other figures in the set and sits on a 3-inch base. The Rise of the Runelords set, scheduled for a June 2012 release, contains 60 figures in the standard set, with promotional figures to be announced in the future. Pathfinder Battles Encounter Packs generally will include 6 figures each. 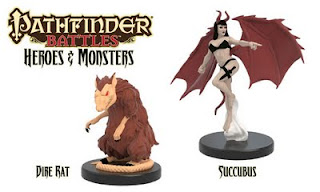 Q: Will Pathfinder Battles fantasy miniatures be available as part of a Paizo subscription?

A: Pathfinder Battles fantasy miniatures are produced by WizKids under license from Paizo, and are not currently part of any Paizo subscription. That said, Paizo understands that many of its customers would appreciate a way to subscribe to these miniatures, and is currently exploring options to offer a subscription or similar service.

Q: Do these miniatures use Reaper's sculpts?

A: These miniatures use all-new sculpts by WizKids.
Posted by Mission Specialist at 6:21 PM No comments: