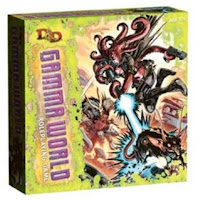 Got our pre-release of the new edition of GAMMA WORLD! We've got the box set and the 8-card booster packs.


A wacky, wily roleplaying game of post-apocalyptic peril.
Earth. After the apocalypse. Never mind the radiation—you’re gonna like it here.

The D&D Gamma World Roleplaying Game offers hours of rollicking entertainment in a savage land of adventure, where the survivors of some mythical future disaster must contend with radioactive wastes, ravaged cities, and rampant lawlessness. Against a nuclear backdrop, heroic scavengers search crumbled ruins for lost artifacts while battling mutants and other perils.
This product is a complete, stand-alone roleplaying game that uses the 4th Edition D&D Roleplaying Game system as its foundation. It appeals to D&D players as well as gamers interested in fantasy science fiction set in a bizarre, post-apocalyptic world. 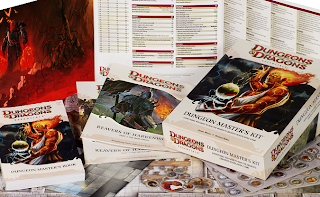 We also received the pre-release of the new D&D Essentials DM's Kit.

If you’re a Dungeons & Dragons player interested in taking on the role of the Dungeon Master, or if you’re an experienced DM looking for more game advice, tools, and adventure content, the Dungeon Master’s Kit has exactly what you need to build your own Dungeons & Dragons campaign and excite the imaginations of you and your players.
This deluxe box contains rules and advice to help Dungeon Masters run games for adventurers of levels 1–30. It also includes useful DM tools such as a Dungeon Master’s screen (with tables and rules printed on the inside), die-cut terrain tiles and monster tokens, and fold-out battle maps.
Game components:

We've also got restocks on MtG Zendikar, and Scars of Mirrodin, and restocks on Heroclix and we've got the board game Bang! back in stock.
Posted by Mission Specialist at 12:41 PM